I've been wanting to do another recipe post all week, but truthfully haven't been cooking.  I've been a bit under the weather for a few weeks, and can't seem to get rid of a nagging cough/cold, despite a full scale assault I've launched with both traditional and non-traditional medicine.  I've been working through this malaise, and just can't seem to get my energy back, so the husband has been kind enough to feed me some of his specialties (rigatoni with meat sauce!  taco night!).  However, it seems really above and beyond to ask him to blog about his dinners, so more recipes will have to wait until this weekend when I'll hopefully have more energy to get back in the kitchen, and share some more cozy fall cooking ideas, of which I have no shortage (teaser: we have an apple tree in our backyard we plan to harvest soon, so brace yourself for apple butter/sauce/pie and more in the near future).  In the meantime,  what are your home remedies for knocking out a lingering sickness?  This is what I have been trying:

This last one is meant to represent a NASTY homeopathic tincture I got from our naturopathic doctor, which tastes like absolute rot.  It is a testament to how run down I am feeling that I am choking this stuff down no less than three times a day.  I will do anything to get my energy back at this point.  Please let me know if you have any ideas (other than flying to California for some needles from her, and spend a weekend convalescing here).  In the meantime, I can't get too down when priceless works of art such as this one greet me when I come home: 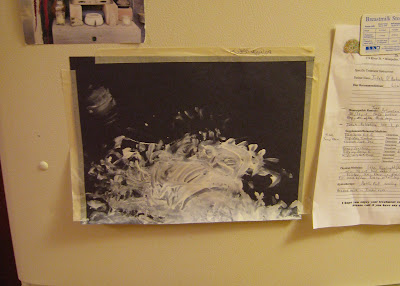 That's right, the little guy's first foray into finger painting.  How much do I love this?  The idea of a bunch of under-one-year-olds messing around in paint at daycare is enough to bring a smile to my face, and the finished product?  I am sorry, but I think it is just genius, and clearly a commentary on the change of seasons and the snow that is soon to come. Baby J, you are the next Picasso.