Halloween weekend was unseasonably warm and filled with fall goodness.  On Saturday, dinner makings and extra pumpkins were procured at the last farmers' market of the season.  A carving party ensued, with some very creative results. 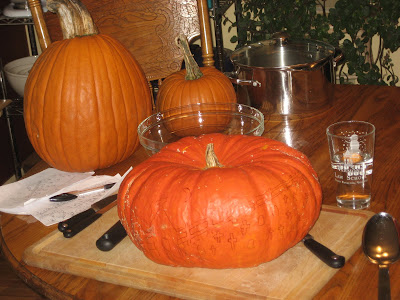 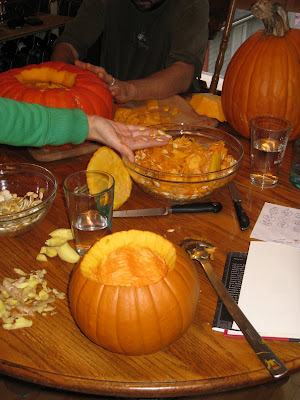 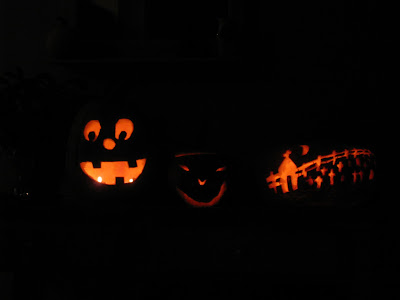 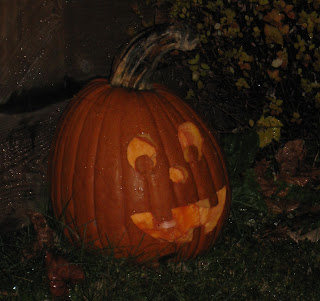 The beautifully glowing pumpkins totally transformed our porch for the trick-or-treaters, and the pumpkin seeds were a delicious snack to go with our happy hour glasses of wine (for the gals) and local beers (for the guys).  We roasted the pepitas with truffle salt and paprika for about 20 minutes at 350 until they were nice and crispy.  Truth be told, they came very close to being burnt with so many other things going on (doorbell ringing, dinner cooking, Baby J being cute in his costumes), but they were saved just in time.  Speaking of the little guy... 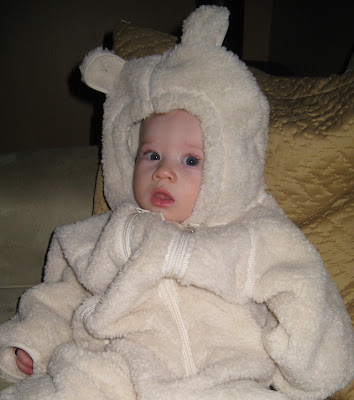 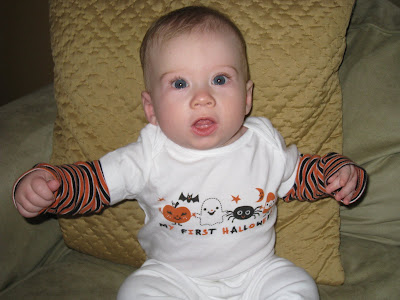 I mean, who could concentrate on cooking with this guy around?
We did manage to pull together a nutritious dinner to balance out all the candy.  The husband did his brilliant grilling thing with some country-style ribs, and the ladies cheffed up the side dishes.  My friend S has a way with leafy greens, and made a colorful and delicious dish. 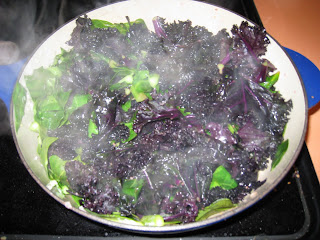 This was:
1 bunch of collard greens, roughly chopped
1 bunch of purple kale, roughly chopped
Olive Oil
Sea Salt
Juice of 2 lemons
Fresh ground pepper
This really isn't even a recipe, but more a philosophy.  The philosophy being, with vegetables this gorgeous, you don't need to do much... just stay out of nature's way and let them do their thing!  We heated the oil in a heavy skillet, sauteed them until they were just wilted, and then seasoned them to taste.  They were fresh, flavorful, and a great foil to the fattiness of the ribs. We also made another, unpictured side dish, with a pint of cherry tomatoes, a large leek, and a can of corn.  We simply cleaned and chopped the leek and sauteed it in butter until it caramelized.  We then threw in the halved cherry tomatoes and let them soften, and then tossed in the corn.  We seasoned the mix with generous amounts of salt, pepper and Herbes de Provence.  Tasty!

The weekend warmth was such a treat, but I am now ready to snuggle into the end of fall, and embrace November.  My busy season at work wraps up for a bit after this weekend, and my head is swimming with Thanksgiving ideas.  Get ready to see some more home cooking!
Posted by Mama J at 4:56 PM