Just in time for the start of the school year, welcome to my new recipe series, "Start With..."
I often spend Sundays cooking a variety of things for us to eat throughout the week, and learned long ago that if I just make, say, a pot of soup, neither of us want anything to do with said soup by Wednesday.   My "Start With..." idea comes from the notion that you can make one versatile big batch item to start with on Sunday, and let it live in many different incarnations throughout the week, each so diverse from the last that your family will hardly recognize it's reappearance.  This week, for example, I made a big pot of chile verde on Sunday, which reappeared as carnitas burritos on Tuesday.  Ideally, a Sunday dish would have even more ways to vary in appearance as the week goes on, and in the name of that efficiency and creativity, I bring you "Start With..."
To kick us off, I'm starting with something gloriously simple, and found in every toddler-having home I know... the humble sweet potato. 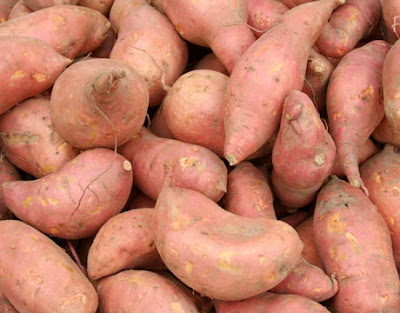 It's hard to think of another vegetable that packs such a nutritional wallop while simultaneously being nature's answer to dessert.  Sweet potatoes are an unsurpassed source of Vitamins A and C and beta-carotene, as well as being high in fiber and anti-oxidants.  They even have anti-inflammatory properties beneficial to your digestive system.  And as the cereal commercial says, "don't worry, your kids will eat it." Finally, these tubers are dirt cheap, even in organic varieties.  A nice-sized organic sweet potato can make a filling dinner and only set you back about $2.  I love these beautiful taters!
So, in honor of the start of September and the return to cool weather and all things root vegetable, this week let's Start With a tray of roasted sweet potatoes. 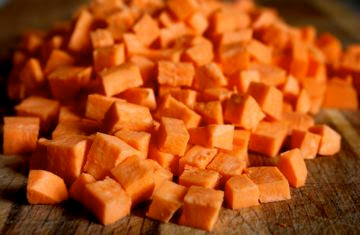 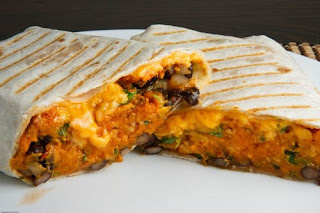 Just smash your roasted taters and warm in a frying pan, stirring in a drained can of black beans, cumin and paprika to taste, and some chopped cilantro.  Roll in a tortilla and serve with sour cream, salsa and guacamole if you are feeling fancy.

Or make like one of my favorite local cafes and build this incredible sandwich...

Roasted sweet potatoes (you'd need to slice your cubes into thin pieces) layered on great bread with sliced red pepper, avocado, jack cheese and sprouts.  This cafe spreads the while thing with a phenomenal tahini-poppy-yogurt spread I have yet to recreate, but you could improvise with any number of creative condiments, including good ole mayo.

Or get out your nori, sushi rice, some sliced avovado and a tatami mat and roll some tasty vegetarian sweet potato sushi. 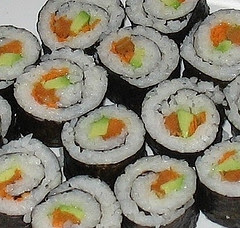 Use the sweet potato cubes as croutons to give a salad heft.
One of my favorite salads is sweet potatoes tossed with baby spinach, goat cheese, dried cherries and chopped tomatoes in a balsamic vinaigrette.  Serve with a great crusty bread, and you have dinner.

And, of course, you can use your sweet taters as a killer side for any number of quick weeknight dinners...
- crisp quickly in a pan and dip in ketchup alongside veggie burgers (or regular burgers) as rustic and healthy french fries.
- make this Roasted Sweet Potato Salad with Onion, Rosemary and Parmesan from Bon Appetit
and serve alongside a simple grilled pork chop or piece of chicken.
- chop and saute swiss chard in olive oil with a clove of minced garlic, add a handful of sweet potatoes and a generous handful of parmesan for a quickie gratin to serve with fish or another light protein.
- drop sweet potatoes into a baking dish, drizzle with maple syrup, cover with marshmallows and bake until marshmallows are toasted for a fast, weeknight version of everyone's Thanksgiving fave.
Start with sweet potatoes and the possibilities are endless!
What's is your favorite sweet po' creation?
Posted by Mama J at 2:43 PM