There's only so many nights you can eat Annie's Mac or Flatbread pizzas without feeling a little gross and domestically delinquent.  As I mentioned, we're entering another busy season here at Casa SMJ, and my time for creating complex weeknight dinners is limited.  During times like these, the best I can do is strive for a culinary middle path, somewhere between dinner entirely from a box or can and entirely made from scratch is my salvation.  Cover your eyes, people, we're going semi-homemade: 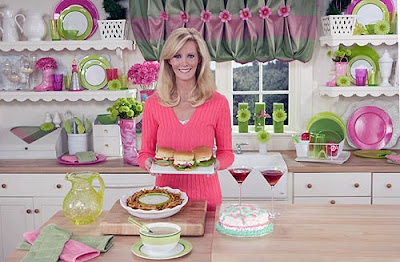 Photo: Food Network, Semi-Homemade with Sandra Lee
Let it be known that I can't stand this woman, and that her "tablescapes" and outfit-matching kitchen decor make me want to take a Xanex; however, she is onto something, as much as I hate to admit it.  Most people just don't have the time or energy to make their whole weeknight dinner from scratch, and the next best thing to calling for a pizza is "cheating" a little, and calling upon help from jars and cans.  I think there are ways to do so without totally going over to the dark side.  Take our Tuesday dinner... 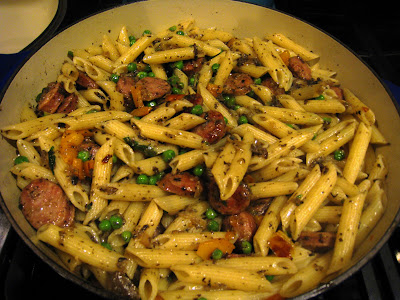 Penne Pasta in Mushroom Sauce with Sausage, Peppers and Petite Peas
"But SMJ," you say, "didn't you have two conference calls, a full work day, and that omnipresent toddler to contend with on Tuesday?  Wasn't it also raining and terribly depressing in Boston?  And aren't your eyebrows long overdue for some tweezing?  Did you not want to simply dial for Pad Thai and call it a day?"
Yes, my pretties.  I totally did not feel like cooking.  But, I anticipated that I wouldn't want to cook this week on Saturday at the grocery store, and with some smart shopping, I was able to prepare this meal with almost no effort.  Behold, mama's little helpers: 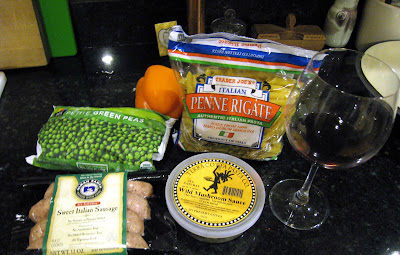 Good shopping makes for a good meal... we have frozen petite peas from Whole Foods, Niman Ranch Sausage, Trader Joe's penne, an orange pepper, and the star of the show, a prepared mushroom sauce from a local pasta shop.  Yes, that sauce cost $4, but it also took this meal from ho-hum to highly delicious, and made it seem like I had been slaving over the stove for hours.  With the glass of wine pictured above, this meal made me feel like a normal human being with enough time in her day to prepare a proper dinner for her family. All I had to do was chop and saute the sausage and pepper, throw in a handful of peas, boil up some pasta, and toss the whole lot together in the sauce.  Dinner was ready in 15 minutes, meaning my husband, sister and I got to sit and savor it with some good conversation to boot.  Sometimes, it is well worthwhile to go semi-homemade.
What's your favorite quickie dinner?
Posted by Mama J at 9:58 AM