So... this is one of those recipes that I debated sharing.
It was Wednesday.  I wanted enchiladas, but didn't feel like doing any rolling of tortillas, making of sauce, or scrubbing of baked-on cheese from Pyrex dishes.  I also had an afternoon run planned, so I wanted to be finished preparing dinner during the early-afternoon span of nap time, which meant employing the slow cooker.  I had a pile of delicious ingredients... 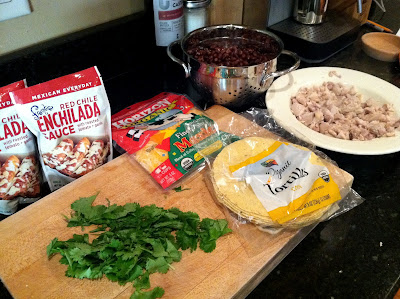 I also had a vague idea of how I wanted to prepare this dish.  What did I have in mind?  A lasagna-like interpretation of enchiladas, with layers of corn tortillas, black beans, cilantro, shredded chicken, sweet corn and cheese melded goo-ily together through several hours in the slow cooker with a tasty (yet store-bought) enchilada sauce.  I poached and shredded a pound of boneless, skinless chicken thighs, then went to work, assembling layer after layer of the above ingredients in my slow cooker. 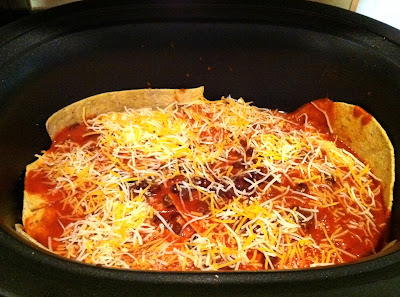 I then set it to low for five hours, cleaned the kitchen, and went about tackling the rest of my list of things to do.  When I had returned from my run, showered, and we had gotten the little man down to sleep for the night, I set about plating our dinner.

I had expected to dish up something that looked like this...
Instead, I served this... 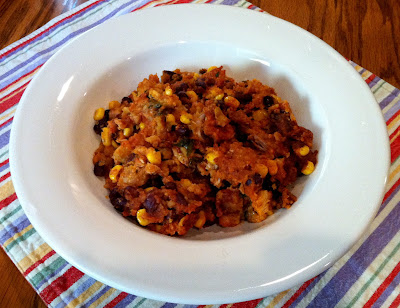 ...which is really best described, as the post title suggests, as Mexican Comfort Mush.  The tortillas had basically disintegrated, becoming some sort of unintentional polenta.  The chicken had all but disappeared as well, as it was so tenderized by the slow cooking process.  But the dish smelled fantastic, and it was 7:45 and time to eat something, so I went ahead and served it, already kind of branding it as a failure in my mind before we had even taken a bite.
Here's the thing: it was really delicious.  Comforting, warm, nourishing, and full of protein, this dish totally hit the spot, and we both went back for seconds.  We kept remarking about how good it was, especially with a little dollop of sour cream on top.  It was almost like some sort of really thick, dense, tortilla soup/stew hybrid.  I was happy to eat a dish of this for lunch today, and I'll make it again, although I think that I'll continue to tweak the recipe until I get something that resembles more of a casserole than a mush.  The concept is a keeper, the execution just needs some work.
Despite its imperfections, I thought I'd share the basics of the recipe with you today in the hopes that maybe you can play along as I work on perfecting it. Veggie friends, you can play too, as I think the chicken was somewhat superfluous, and could have been easily subbed out for shredded sweet potato, or perhaps even tofu.  Please let me know if you try preparing this recipe with or without any tweaks, and together we can create slow cooker enchilada casserole nirvana!   Or follow the recipe as it is, and get ready for some mushy goodness that you can perhaps serve to someone who has recently had their braces tightened or their wisdom teeth out, or a toddler slightly less picky than my own!
Here's what I started with:
Slow Cooker Chicken Enchilada Casserole, Take One
Ingredients
10 small corn tortillas, cut in half
32 oz. red enchilada sauce
1 8 oz. package shredded Mexican-blend cheese
1/2 cup cilantro, chopped
1.5 cups corn kernels
2 cans of black beans, drained and rinsed
1 lb. boneless, skinless chicken thighs
Salt
Directions
1) Bring a large saucepan of salted water to a boil.  Add chicken thighs and simmer until they are cooked through, approximately 10 minutes.  Allow them to cool, then shred by hand, or chop coarsely.
2) Cover the bottom of the slow cooker with enchilada sauce.  Begin creating layers of tortillas, veggies, chicken, cilantro, sauce and cheese, until you've used all of your ingredients.  Make sure that the last layer is covered in cheese.
3) Cook on low for 5 hours.  Serve.
Posted by Mama J at 4:06 PM