It was a perfect fall weekend in Vermont.  Saturday was sunny and crisp and perfect for walking in the woods. 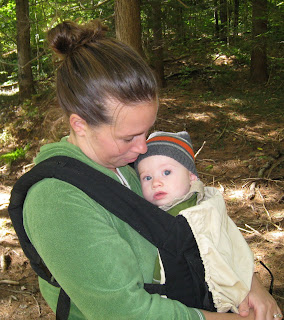 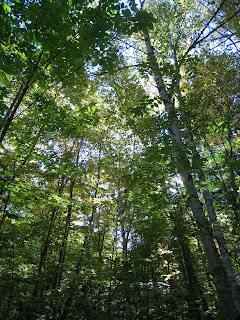 Sunday it rained.  It was a great day for going out to brunch, and then cooking all afternoon.  I love to make big pots of soup on Sundays.  With a bunch of chopping and simmering, you can have healthy, grab-able lunches and/or easy dinners all week.  This weekend, my mom came up, and hit the Portsmouth Farmers' Market on her way.  She arrived at the market as it was closing, so she just rushed to grab as many veggies as she could as the farmers were starting to pack them away.  She arrived with an amazing bounty of organic beauty: 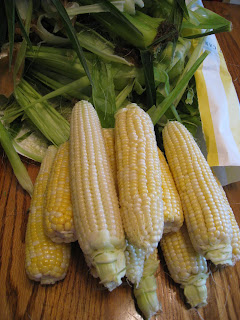 And we came up with two soup ideas to put them to use: 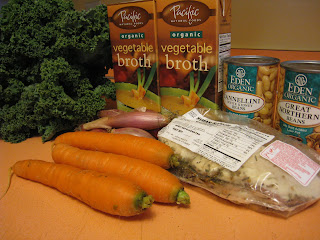 1/4 lb. guanciale (you could also use pancetta)
1 large yellow onion, peeled chopped
3 carrots, peeled and chopped
2 large bunches of green kale
2 cans of white beans (we used 1 of Cannellini and 1 of Great Northern, both organic)
8 cups of chicken or veggie broth


The special ingredient here is this Niman Ranch guanciale. 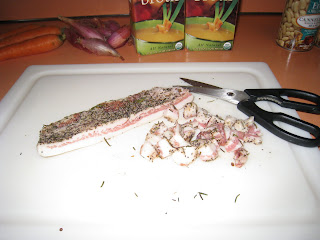 The husband is a tad obsessed with specialty Italian pork products, and tracked this down at an amazing butcher shop on our last trip to New York City.   However, any quality pancetta from your market could take its place.  So, we started by chopping the guanciale into small pieces, and then we browned it over medium-low heat in a heavy enameled cast iron pot. 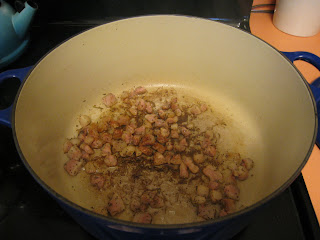 When it was brown, we removed it with a slotted spoon and let it drain on some paper towels, and discarded almost all of the fat, but left the sticky brown bits in the bottom of the pan and added the chopped onions to that to brown and caramelize on medium-low heat.

In the meantime, I prepped the rest of the veggies.  I peeled and chopped the carrots, and removed the stems off of two large bunches of green kale (from our friend Laura Neale's Black Kettle Farms in Alfred, Maine) before chopping that as well.  Removing the stems takes some of the bitterness and crunchiness out of the kale. 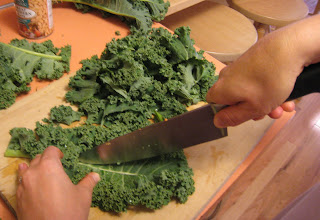 Once the onions were caramelized, I added the carrots to saute for a bit, maybe 5 minutes or so.

You'll notice a pot change happens here.  I love my Le Creuset dutch oven, and nothing caramelizes onions quite the same way, but I only have one (so far) and today was a 2 soup day.  So, once this step was complete, I moved the veggies to a normal soup pot to begin caramelizing the onions for soup #2 in the LC.  Anyway... 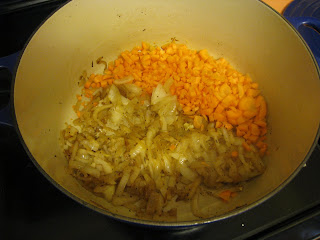 With the carrots cooked in a bit, I then added the 2 drained cans of white beans, the drained bits of guanciale, all of the chopped kale.  I threw the top of the pot on for a few minutes to let the kale steam down a bit. 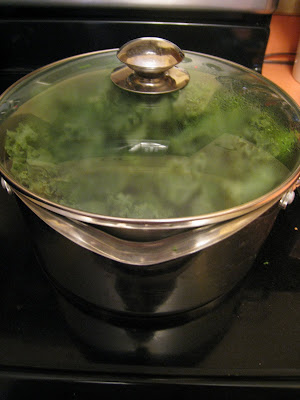 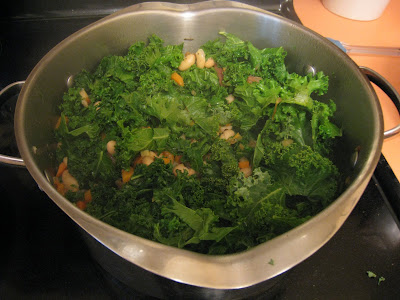 Then I added 8 cups of veggie broth (I'd have homemade if I was really on top of my game, but there is only so much a woman can do), stirred the mix well, turned the heat down to low.  We then let the whole thing simmer for about an hour until some of the broth cooked off and the kale was really soft and the guanciale has more or less disintegrated. 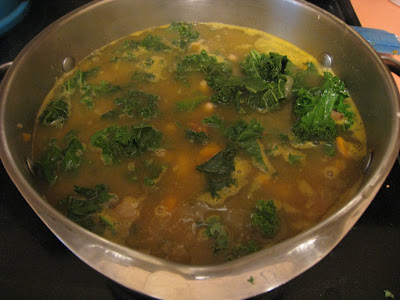 The finished product is incredibly hearty and flavorful, and didn't need any additional spices at all, due to the powerful flavor of the guanciale.  If you used pancetta, you may want to consider adding salt and pepper to taste.   This recipe should serve 8-10, or make many lunches and dinners for a couple for a week.  Enjoy!

The second soup was a smorgasbord of most of the other veggies my mom grabbed on her sweep through the farmers' market and basically just involved a whole lot of chopping: 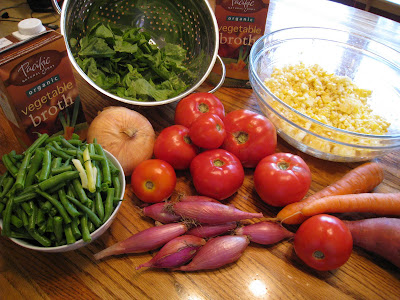 
We started by sauteing the 2 kinds of onions together in a glug of olive oil until they were nice and caramelized, maybe 10 minutes.  We then added the carrots and sweet potato, and let that all cook together for another 10 minues. 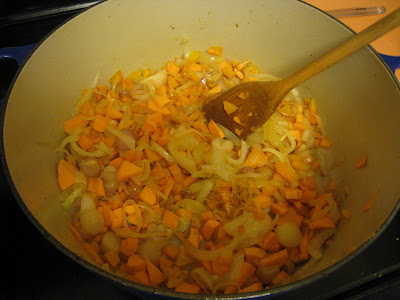 In went the corn and green beans for a 5 minute saute-fest. 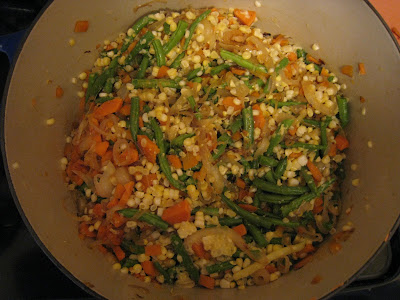 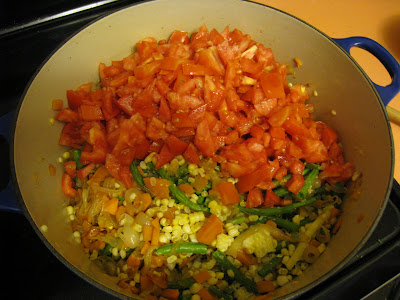 And last but not least, the broth and basil. 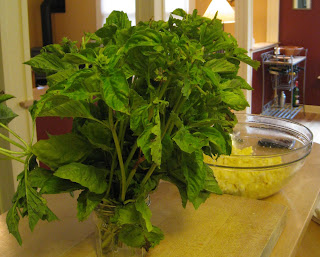 We let this all simmer together for about 20 minutes, and then we tasted it, with the intention of adding spices. 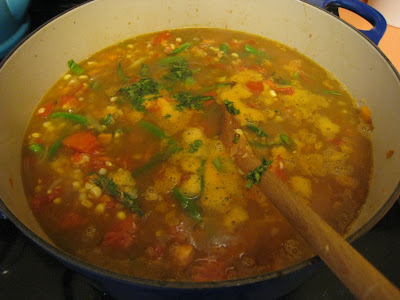 It didn't even need a single one!  Not even salt or pepper.  This soup just tastes absolutely light, sweet and pure.  It is like summer kissing you goodbye, and just feels so healthy to eat.  If you wanted to, you could add some salt, or maybe a little freshly grated parmesan cheese on top, but it just doesn't need it.  This tastes like the kind of thing you would eat on a yoga retreat, and come home feeling fabulous.  It was also very easy to throw together; the only labor intensive part was the chopping. I highly recommend trying to recreate this before we are all up to our ears in root veggies for awhile. 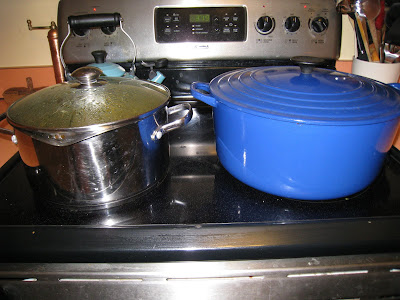