Back with a Grill Fest

I'm baaaaack after a unintended but much-needed brief blogging hiatus.  Sometimes a girl just has to unplug for a few, you know?  However, now I am coming back at you refreshed and full ideas to share this fine June, so expect a lot of posts here soon, many of which will most certainly center around one of my favorite things about summer: the grill.  It is no mistake that I married a man who owns three grills; we share a love of cooking over an open flame that will keep us together forever.  We really did it up this Memorial Day weekend, and I'm excited to share some of the goodies.  My inspiration came from my favorite magazine of the whole year: Food and Wine's June Grilling Issue.  Every year I swoon over the photos and new ideas, and I can't wait to try them out as soon as the weather permits.  This weekend we had two real winners from the June 2010 issue: Grilled Tomato Crostini and  Pasta Salad with Grilled Sausages and Peppers.  Swoon, swoon, swoon.  First the crostini... 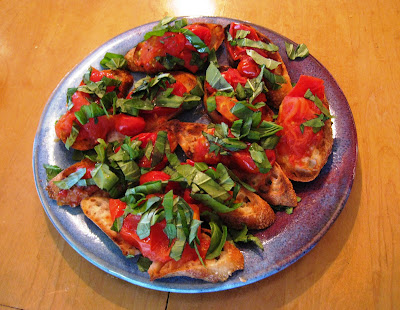 So simple, so easy and so elegant; I'll definitely be making this many times that the grill is lit this summer.  You simply make a tinfoil pack, and fill it with mounds of fresh tomatoes (chopped heirlooms, whole grape and cherry tomatoes... basically, whatever looks good at the store).  You season the whole thing generously with kosher salt and pepper, add a large glug of olive oil, and throw it on the grill for about 20 minutes.  In the meantime, you slice a baguette or ciabiatta and grill the slices until they are nicely toasted.  You cut a garlic clove in half, rub it into the toasts, top them with the grilled tomatoes, and shower the whole thing in freshly chopped basil to finish.  This is one of those "Duh" recipes... tomatoes and basil on crostini are not exactly culinary wizardry.  However, there is something about the sweet, smoky, juicy flavor of the grilled tomatoes that really takes this recipe over the top.  We made a ridiculous amount and they all disappeared.  On to the pasta... 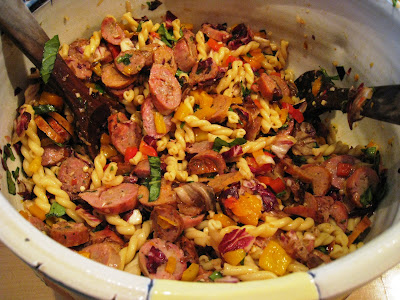 YUM.
I've linked to the real recipe from Food and Wine above, but mine was a slight variation.  I left out the smoked mozzarella because more than half the people around the table were lactose intolerant, and I respect that.  We all agreed that the cheese wasn't missing at all.  I also left out the celery because I despise celery with a passion, and that is just how it is.  Finally, I just worked with the sausages I could find: 3 hot and 3 sweet Italian ones that my friend Molly happened to have on hand, and what looked good at the butcher, which was not "weisswurst" and breakfast sausage, which the recipe called for, but Niman Ranch Andouille Sausage and Al Fresco Roasted Pepper and Asiago Chicken Sausages (yes, I realize Asiago=cheese, I thought maybe just a dash of it would be okay for my lactose-averse peeps...it seemed to work out well).  This is a really special recipe which requires a ton of grilling (thanks, husband!). 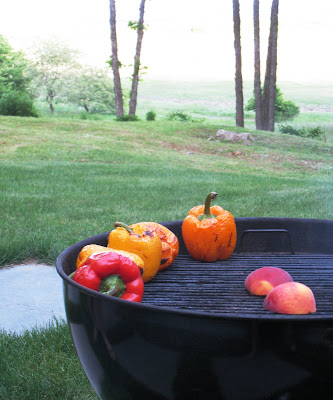 We grilled peppers, sausages and radicchio and chopped them all.  That is also a little peach you see on the grill, just because.  We ate some on the side, and fed some to the baby.  Thumbs up all around.   The grill really turned the radicchio into a caramelized, bittersweet, beautiful treat. 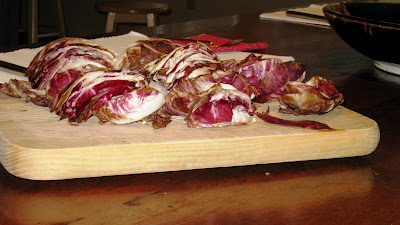 You toss all of this loveliness with a dressing made of fresh lemon juice, lemon zest, fresh basil and thyme, garlic and shallots.  It is really the best of summer in a bite and so different than the usual fare you see coming off of your backyard grill.  With a nice glass of Erik the Red table wine from Toad Hollow this was a fabulous early summer meal. 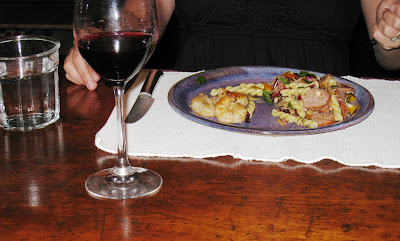 Thanks to our own "Good Golly" for aforementioned bottle of red and for food photography assistance!
Posted by Mama J at 4:00 PM