Randomness coming at you in no particular order...

I had the best run this morning.  Perfect conditions: 55 degrees, sunny, warm, and not too much wind.  I am really going to miss running around this pond... 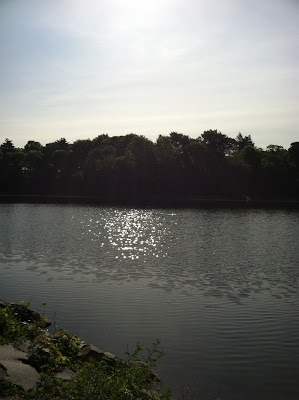 This run has been one of my top favorite things about living here, and probably my favorite run-from-home I've ever had.  I love the morning sun sparkling on the water, the absence of traffic, the constant fabulous people watching/company (running alone on the rural roads in Vermont I sometimes wouldn't see another soul the whole time and was often concerned about crossing paths with an angry moose or reclusive ax murderer and not having any back up on hand... never a concern at lovely Jamaica Pond), and I love that the loop route from our house is the perfect distance for us (just under 4 miles, and you can easily add mileage in 1.5 mile increments by continuing to loop the pond before heading back).

This morning was especially lovely, and I appreciated the alone time to clear my head amidst all the moving madness.  One funny element to share, however: I am in a seasonal/pregnancy conundrum where my belly has outgrown all my regular workout shirts, but it is a tad bit too chilly to run in a maternity tank (which I have aplenty).  In a few weeks it will be searing hot tank top city, so no need to purchase anything... instead I've created a band-aid solution of wearing the husband's t-shirts to run till the temperature rises, and the one that fits and feels the best is a brown shirt that says "I Love Brown Bits". 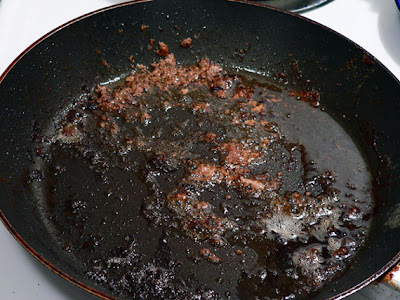 If I've already lost you, brown bits (aka fond), are the caramelized bits of food and rendered fat that stick to the bottom of a pan after you sear something.  By deglazing the pan with a bit of wine or broth, you loosen and emulsify the brown bits to make spectacular pan sauces.  The husband is always adamant about not wasting the brown bits when we cook, so at one point this shirt seemed both hilarious and appropriate for him, when we were hanging out with a lot of restaurant peeps and still in our twenties.  Now, it has lost some relevance, and is my running shirt.  Anyway.

I already look crazy enough running pregnant in my sister's old soccer shorts, laughing maniacally to a Joy the Baker podcast in my earbuds.  This Brown Bits shirt really pushes my crazy person look over the top, as if you aren't a line cook or obsessive foodie, well, I can only imagine what the term "brown bits" might bring to mind.  I got some really odd stares and glances sporting that shirt this morning.  Maybe every one in six people got the joke and gave a little grin, but the rest looked at me like I was truly insane.

So, my question to you is: do I continue to rock the shirt and make people's mornings a little weirder until tank top weather rolls around, or should I rethink my awkward preggo athletic fashions?  I need input.
***
On an entirely different topic, may I rant to you for a moment like the crochety old lady I am rapidly becoming?  Thanks.

I have been selling a ton of our belongings on Craigslist this week, as purging pre-move is bringing me an addictive satisfaction/high.  We'll probably end up showing up to the new place with nothing but a couple of yoga mats and our KitchenAid mixer at the rate I am going.  For the most part, this has been a simple, if time-consuming, process, but on Wednesday, I totally got stood up twice in one day by a potential buyer, and it really got my dander up for some reason.  Said chick was supposed to be here at 2:30pm, and when she didn't show by 3, I texted to see where she was.... she said she actually couldn't get here until 6pm, would I be here then.  Grrr. Fine. Yes. Sure.  Of course 6pm became 6:30 and then 6:45 and as my evening kind of disintegrated before my eyes, I texted again to see where she was... "sorry no car" is all I got back, and that was that.

Listen lady, I don't care if you don't want my ten-year-old Pier One wine rack from my bachelorette apartment after all, that's totally fine.  Just drop me a simple line saying thanks but no thanks rather than having me pace my apartment waiting for your arrival when I could be doing things like bathing my kid.  I mean, really, who does that???  Why would you inconvenience someone twice in one day for no reason?  Have societal norms of decency and politeness just totally evaporated?  I was pretty fired up until I realized that my wrath made me just as crazy a chick who made two appointments to pick up a wine rack she didn't want, and then I let it go, but man, I just have very little tolerance for unprovoked rudeness.

Whew.  That feels better.
***
In closing, a shout out to the Google machine, without which modern parenting would be impossible.  A simple Google search has once again shown me the light...
If you ever need to get a large amount of very strong adhesive glue out of a pair of toddler-sized Crocs, drop me a line, I've got you covered.
Yes, it has been that kind of a week. Don't even ask.