In the world of health food blogs, oatmeal is the King of Breakfast.  And I'm not talking about those little sugary packets that you mix with boiling water, I'm talking about legit, old-fashioned, slow-cooked, rolled oats with that Quaker fellow on the front with his stern-looking mug.  You really wouldn't believe the plethora of food blogs out there that consist of photo after photo of this whole grain, cooked into submission, morning after morning. The upside?  When you're having oats for breakfast three hundred-odd mornings a year, you come up with some creative ways to serve the stuff.  And this is where my FFF Part Three comes in: ladies and gents, I give you Oats in a Jar. 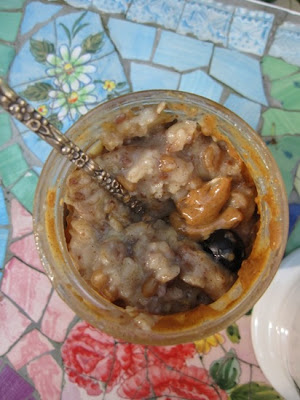 Photo from Kath Eats, undoubtedly the queen of all healthy living bloggers and oatmeal photographers... check out her Tribute to Oatmeal!
You know when you come to the end of a jar of delicious nut butter, and you've scraped and scraped with your little knife, but there are still plenty of bits of nutty goodness that just won't come up outta there?  Inevitably, you recycle the thing, sadly wasting some small tablespoon of goodness still trapped inside.  This is where Oats in a Jar come in!  You simply whip up a batch of old-fashioned oats, but instead of pouring them into a bowl, you pour them into your almost-empty nut butter jar.  The heat from the oats melts the peanut/almond/cashew butter from the sides of the jar, helped along by your spoon, and every bite is full of salty-sweet, protein-rich deliciousness.  Better yet, this breakfast is uber portable, and saves you from washing a gummy oatmeal bowl... you simply rinse and recycle!  Your grandparents would be proud of this kind of depression-era resourcefulness and frugality, and the oatmeal really is especially healthy and delish.  This is one of those "duh" ideas that you just need someone else to point out to you sometimes. So, thank you, oatmeal-obsessed bloggers, this is one tip I will keep (you can keep your tempeh melts though. mama likes her bacon.).
Stay tuned for part four, wherein I reveal the sexiest show on television (and it doesn't have to do with any Housewives).
Posted by Mama J at 8:05 AM